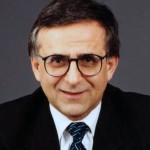 Hooshang Amirahmadi is a professor and former director of the Center for Middle Eastern Studies at Rutgers University. He holds a PhD from Cornell University and is the founder and president of the American Iranian Council. He is also a Senior Associate Member at Oxford University in the U.K. His publications include The Political Economy of Iran under the Qajars, Revolution and Economic Transition, and three other books in Persian on civil society, industrial policy, and geopolitics of energy. Dr. Amirahmadi is also editor of ten books on Iran and the Middle East, and 16 conference proceedings on US-Iran relations, as well as numerous journal articles.

Hooshang Amirahmadi holds a PhD in planning and international development from Cornell University and is a professor of the Edward J. Bloustein School of Planning and Public Policy (www.policy.rutgers.edu), at Rutgers, The State University of New Jersey. In academic year 2008-2009, he was a Senior Associate Member at the University of Oxford, U.K. Professor Amirahmadi has served as director of the University’s Center for Middle Eastern Studies, as chair and graduate director of his department at the Bloustein School, and as the University Coordinator of the Hubert Humphrey Fellowship Program. He is the founder and president of the American Iranian Council (AIC) (www.american-iranian.org), a research and policy think-tank devoted to improving dialogue and understanding between the peoples of Iran and the United States. Dr. Amirahmadi is also a founder of the Center for Iranian Research and Analysis and served as its director and publication editor for many years. He was a candidate for President in the Presidential Elections in Iran in 2005 and 2013. Dr. Amirahmadi is also the president of Caspian Associates, Inc. (www.caspian-associates.com), an international strategic consulting firm headquartered in Princeton, New Jersey.

Professor Amirahmadi is the author of The Political Economy of Iran under the Qajars: Society, Politics, Economics and Foreign Relations 1796-1926; Revolution and Economic Transition: The Iranian Experience; and three other books in Persian on civil society, industrial policy, and geopolitics of energy. Dr. Amirahmadi is also editor of 10 books on Iran and the Greater Middle East, and 16 conference proceedings on US-Iran relations. His edited books include The Caspian Region at a Crossroad: A New Frontier of Energy and Development; Small Islands, Big Politics: The Tomb and Abu Musa Islands in the Persian Gulf; The United States and the Middle East: A Search for New Perspectives; Post-Revolutionary Iran; Iran and the Arab World; and Reconstruction and Regional Diplomacy in the Persian Gulf. He has also authored over 200 scholarly journal articles and book chapters as well as numerous editorials, magazine articles, interviews and book reviews (in English and Persian). He writes for and edits the official AIC publications, and publishes in numerous electronic media. He serves on the editorial board of the Journal of Urban Technology. A frequent contributor to many conferences in Europe, North America, Asia, Latin America, Africa, Eurasia and the Middle East, Dr. Amirahmadi’s writings have been translated and published in Europe, Iran and the Arab world.

He is a recipient of several competitive fellowships and grants from distinguished public institutions and private foundations and corporations including Department of Education, Rockefeller Brothers Fund, and Open Society Institute. Dr. Amirahmadi is a frequent contributor to national and international TV (including CNN, FOX, BBC, ABC, PBS, VOA), radio, and newspapers, including New York Times, Gulf News, Guardian, and Wall Street Journal. He has also served as consultant for the UNDP, the Aga Khan Foundation, the World Bank, and several governments, law firms, and private companies throughout the world. Professor Amirahmadi pioneered writings on the Iranian civil society and reform movement long before it became fashionable in the administration of President Mohammad Khatami. He also predicted its demise and the reappearance of anti-reform forces. Dr. Amirahmadi’s pioneering work on dialogue, understanding and better relations between the United States and Iran is widely acknowledged in the United States, Iran and beyond. His graduate teachings at Rutgers include courses on global restructuring and public policy, international economic development, national and regional development planning and policy, and the Middle East in transition.

Dr. Amirahmadi was constitutionally qualified for the presidential office he ran. According to the amended Iranian Constitution of 1989, “the President must be elected from among religious and political personalities possessing the following qualifications: Iranian origin; Iranian nationality; administrative capacity and resourcefulness; a good past-record; trustworthiness and piety; convinced belief in the fundamental principles of the Islamic Republic of Iran and the official religion of the country.” On the basis of this specification, Dr. Amirahmadi is fully qualified to serve as President of Iran. He is a self-made individual, born in 1947 into a middle-class family in Talesh County on the Caspian Sea coast. He completed his primary and secondary schooling in Talesh and completed his high school in Rasht, the provincial capital. Inspired by the anti-Shah movements, he turned to writing and publishing poetry and short stories as well as paintings when he was 17. He studied at Tabriz University where he received his Agricultural Engineering degree in 1967.

He then joined the military as an Officer of the Extension and Development Corps, and upon completion of the service, began working at sugar factories in Lurestan and Kohkiloyeh-Boyerahmadi, serving the toiling Lori, Boyerahmadi, Bakhtyari and Qashqai villagers and tribes. He left Iran in 1975 for graduate education in the US after the Shah’s secret police forced him to resign from his position upon his refusal to join the official Rastakhiz Party. Dr. Amirahmadi has returned to Iran many times and for extended periods when he has served the nation in many capacities including post-war (Iran-Iraq) and post-earthquake (1990) reconstructions.

Dr. Amirahmadi has an illustrious record of services. He is unique among Iranian expatriates for his active role in the war against Iraq and for helping with post-war reconstruction efforts. He visited the war zone three times between 1986 and 1988. He was also active in post-earthquake reconstruction and visited the quake sites both in Roudbar-Manjeel (1990) and in Bam (2003). He has stood for Iran’s legitimate rights in the dispute over the Persian Gulf Island of Tunbs and Abu Musa and over the Caspian Sea’s legal status. His books on both subjects detail and defend such Iranian rights. Dr. Amirahmadi has also actively opposed sanctions, isolation and threat of war against the Islamic Republic. In March 2000, he orchestrated the American apology to the Iranians for its involvement in the 1953 coup against the Prime Minster Mohammad Mosadeq. He belatedly ran for President of Iran in 2005 elections and received widespread popular and media attention. His website, both in Persian and English (www.amirahmadi.com), outlines his contributions to many noble causes throughout his lifetime.

Dr. Amirahmadi is a highly successful academic. He holds a Ph.D. in international development and planning from Cornell University. He also holds an MA in industrial management and a BS in agricultural engineering. Currently he is a professor of planning and public policy at Rutgers, the State University of New Jersey, USA. He has served as a Senior Associate Member at Oxford University and as director of the Center for Middle Eastern Studies at Rutgers. He has published 12 books, 14 monographs and over 150 scholarly journal articles and book chapters (in English and Persian). A recipient of many grants and awards from prestigious foundations and corporations, his graduate teachings at Rutgers has included courses in global restructuring and public policy, international economic development, industrial policy and management, and national and regional planning. A frequent contributor to numerous conferences and media in Europe, North America, Asia, Latin America, Africa and the Middle East, Dr. Amirahmadi’s writings have been translated and published in Europe, Iran and the Arab World.

Dr. Amirahmadi is a visionary thinker and doer. Over the last three decades, Dr. Amirahmadi has consistently remained a leader and strategic thinker in academia and politics. His “force theory,” which argues that “offensive force cannot be gainfully used” in the new world was instrumental in convincing the Iranian leaders to accept the cease-fire with Iraq in 1988. He pioneered writings on “civil society in Iran,” a concept that was successfully applied by President Mohammad Khatami during his landslide election victory in 1997. Since 1990, Dr. Amirahmadi has been one of the leading pioneers calling for the “normalization of US-Iran relations.” Beginning in the late 1980s, he was among a few individuals who originally underscored the need for national reconciliation, free and fair elections and political coalition. Dr. Amirahmadi’s most recent contribution is the concept of “nationism,” which is built on the notion that nations are made of and driven by two sets of interests: territorial interests and people’s interests. This concept offers a more holistic approach incorporating Iranian nationalism, which emphasizes territory, and Iranian Islamism, which focuses on the people.

Dr. Amirahmadi is an economic planner, institution builder and policy expert. He is trained and experienced in management, development, planning and public policy. He has many years of experience in as a professor, director and chair at Rutgers University, as an international consultant in socio-economic development, planning and public policy, and as a manager in several academic institutions and industrial organizations in Iran and the US. He is the Founder and President not only of the American Iranian Council (www.american-iranian.org), a prominent organization focused on normalizing US-Iran relations but also of the strategic consulting firm Caspian Associates (www.caspian-associates.com). His advice has been sought by the United Nations, the World Bank, the Agha Khan Foundation, and by many governments, corporations, law firms, media and NGOs throughout the world.

Dr. Amirahmadi is a strategic manager and bridge maker. Iran’s economy is deteriorating and its politics is perplexed by the aggressive policies pursued and led by the US government. The Iranian people are looking for a president with vision, experience, global wisdom, and strategic management capabilities. Most importantly, they are looking for an individual who fully understands the American and Iranian politics, society, and culture as well as their differences. They are also looking for a dependable individual and a bridge maker. Dr. Amirahmadi possesses such qualifications. He is a pragmatic Muslim and an independent “nationist” who wholeheartedly believes in social and economic justice. He also deeply believes in human, civil, and individual rights and prosperity. He despises political revenge and will continue to work for the national reconciliation among all Iranians irrespective of their religious, ideological and political orientations. Dr. Amirahmadi has a nuanced understanding of the Iranian political leadership and has a healthy channel of communication with key media outlets and prominent international players. As President, he will approach politics as a social act, reunite Iran with the international community, and foresee future opportunities and challenges and solve national problems in the most cost-effective manner.